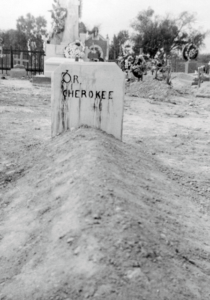 After the film screened on RSU-TV in Northeastern Oklahoma I received the following email and photo from the grandson of Omer L. Morgan, the man from Tahlequah who ventured to Zaragoza in the early 1950’s searching fro Sequoyah’s final resting place.

Thank you for your response.  I enjoyed watching the documentary on RSC-TV.  As I previously stated, I have my Granddad Morgan’s writings on his pursuit of Sequoyah.  Among them is a picture I thought you might find interesting regarding Dr. Cherokee.  I believe this would have been taken around 1952.