Sequoyah: ‘A story about triumph’

Sequoyah created a unique set of characters that developed the Cherokee syllabary. A new film takes a look at this legendary visionary.

“Searching for Sequoyah,” is a documentary that attempts to trace Sequoyah’s journey from Indian Territory to Nacogdoches, Texas to Zaragoza, Mexico, and it’s set to air soon. 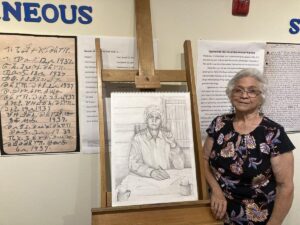 Brian D. King | Daily Press Ernestine Berry is the director of the John Hair Cultural Center and Museum. She has curated the “Missing Pieces” exhibit, which showcases the Cherokee syllabary. Berry is also an artist and sketched an image of Sequoyah.

“Searching for Sequoyah” documentary to explore his life. 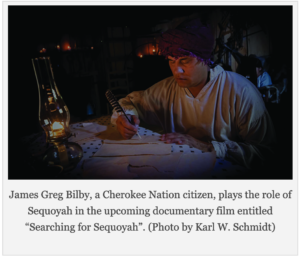 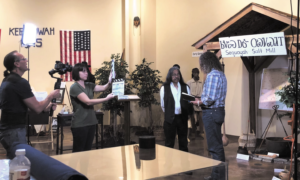 Filmmakers with the “Searching for Sequoyah” documentary prepare to film an interview with UKB member Sequoyah Guess, second from right, about his familial namesake. Director James Fortier, far left, films while Guess tells Tribal Consultant and narrator Josh Nelson that he often felt pressure to live up to his name and considered changing it. BRITTNEY BENNETT/GCN