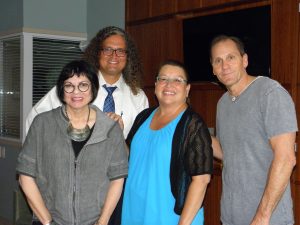 VMM funding is provided by CPB and is specifically intended to support Native American filmmakers. Successful completion of the film will pave the way for a national PBS broadcast and distribution through Vision Maker Media.

Congratulations to Producer/Writer LeAnne Howe (Choctaw), Associate Producer/Investigator Joshua Nelson (Cherokee Nation) and the rest of the crew. Our next production trip will be in October, 2017 when we will revisit sites on and near the Eastern Band of Cherokee Indians in North Carolina, as well as locations in Tennessee. In the spring we will return to the Cherokee Nation in Oklahoma with short excursions into the Wichita Mts. and elsewhere. Production will conclude with a trip to locations in north eastern Mexico where it is believed Sequoyah passed away.