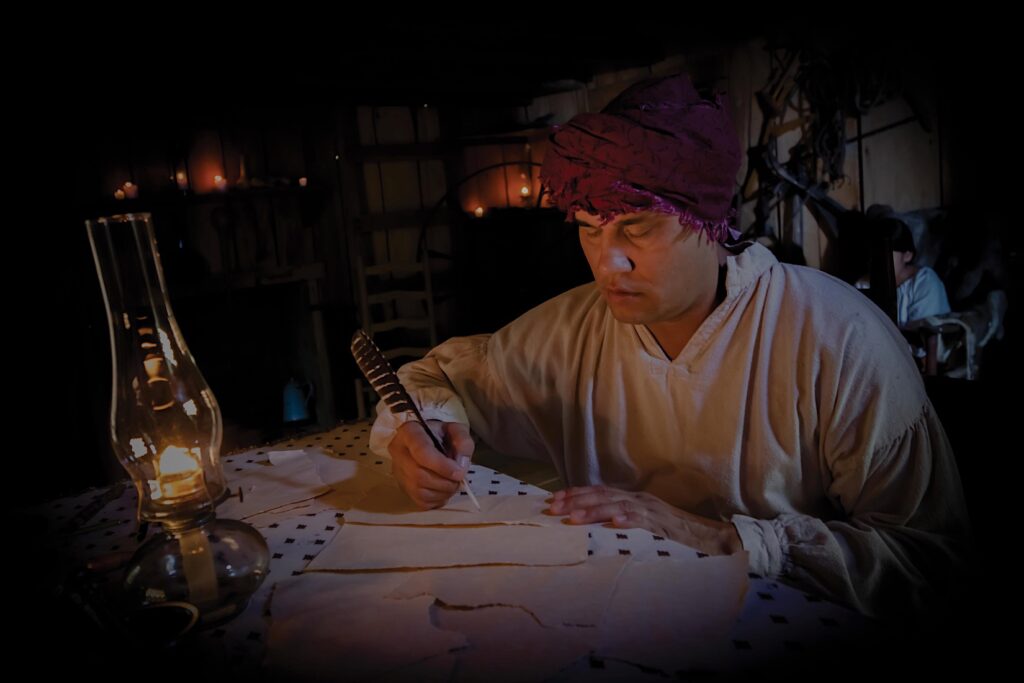 Searching for Sequoyah explores the mystery and legacy of the Cherokee genius George Guess, more commonly known as “Sequoyah,” who created a writing system for the Cherokee people in the early 1800’s. The story spans two countries and three Cherokee nations, leading viewers on a journey through the life and death of Sequoyah, his travels across the continent, and his final expedition to Mexico where he hoped to persuade the “Mexican Cherokees” to reunite with the Cherokee Nation in Indian Territory. Starting in 1838, the Cherokees were forcibly removed from their southeast homelands by President Andrew Jackson and relocated to Indian Territory, now Oklahoma. Thousands died along the way, now known as the “Trail of Tears.” The film chronicles the mysteries and legacy of Sequoyah across the fabric of history through the Cherokee syllabary, and through the modern lives of some of Sequoyah’s descendants, who continue his legacy through their own work as artists, storytellers, performers, Cherokee language teachers and more. From early 19th century cave walls in the southeast, to the first Cherokee language newspapers, to smartphones in the digital age, Sequoyah’s tracks are all around us.

Sequoyah spent much of his life living outside the boundaries of the Cherokee homelands, yet he was culturally and linguistically wholly Cherokee. Known as an artist, soldier and diplomat, Sequoyah’s advice was often sought out by leaders of the various Cherokee factions who drove a wedge between those who favored removal to Indian Territory, and those who wanted to stay and resist. In 1842, Sequoyah sought to reunite the “Old Settler” Cherokees who were forced out of the new Republic of Texas and migrated further southwest into Mexico, just as the newly established Cherokee Nation in Indian Territory was attempting to heal old wounds leftover from the Trail of Tears forced removal. The historical record is spotty, but in Searching for Sequoyah, Sequoyah’s descendants come together with Cherokee scholar and host, Joshua Nelson, to share some surprising stories and anecdotes of their famous ancestor. Winnie Perdue, Nathan Wolfe,  John Ross, Sequoyah Guess, and Verna Bates—all lineal descendants of Sequoyah—share their family’s stories of Sequoyah, passed down through the generations, shedding light on what motivated their elder ancestor to risk his life and travel to Mexico to bring Cherokees back into the newly reunited Cherokee Nation.

Sequoyah is an enigma—he spoke no English, only Cherokee. Most of the facts about his life are open to debate, including his paternity, his age, his appearance and even his name. Cherokee Language Director and artist Roy Boney, Jr., states, “His entire life is shrouded in mystery.” While working in a blacksmith shop at the Tellico Blockhouse circa 1808 (Fort Loudon, TN), Sequoyah allegedly observed American soldiers writing and passing letters on paper, which would become known to the Cherokee as “talking leaves.”  Though illiterate in English, Sequoyah was a natural genius who was determined to give his Cherokee people the power of a written language. Around 1809 he began working in secret on his writing system. Some Cherokee thought he was crazy, attempting to thread sounds on an invisible symbol. Others put him on trial for practicing sorcery, assaulted him, burned down his cabin and destroyed his work. In the beginning, even his own wife was suspicious and unhappy with his efforts.

In 1821, after more than a decade of trial and error under enormous obstacles, and with the crucial eventual assistance from his wife and daughter, Sequoyah finally completed his syllabary, made up of one character for each syllable in the language—86 in total. After initial skepticism, the Cherokee National Council officially adopted Sequoyah’s syllabary in 1825.  It was the only indigenous writing system north of Meso-America, and it lifted the Cherokee people into literacy almost overnight.

The historic record of Sequoyah’s death is scant, but apocryphal tales are plenty. Searching for Sequoyah retraces Sequoyah’s final journey into Mexico, from the mountains outside Múzquiz, deep in the Mexican state of Coahuila—where members of the Kickapoo tribe settled after being expelled from Texas along with the Cherokees in 1839—to a cave outside of Zaragoza (formerly known as San Fernando de Rosas), where local oral traditions allege he died and was buried. Sequoyah’s great-great-great-great granddaughter, 81-year-old Winnie Guess Perdue of Tulsa, accompanies Joshua to retrace her famous ancestor’s final steps in Mexico. Along the way, Winnie meets local Mexican historians, the mayors of Morelos and Zaragoza, museum curators, descendants of escaped slaves from southeastern tribes, and many Mexican people familiar with the stories of her ancestor, Sequoyah. Winnie also meets local historian Alberto Galindo. His archival and genealogical research has documented the history of Cherokee and Kickapoo Indians in the area as early as 1820. Alberto accompanies Winnie to the local cemetery in Morelos, where one crumbling headstone over a century old still reads “Cherokee.” Is it Sequoyah’s grave, or that of another, forgotten Cherokee? Could he, or other strangers we encountered along the way, turn out to be our Cherokee kin? Perhaps discovering connections such as these, the structural foundations of tribal community, was what drew Sequoyah to Mexico in the first place. As Cherokee scholar and author Daniel Justice states, “In some ways, the search for Sequoyah is really a search for us.”