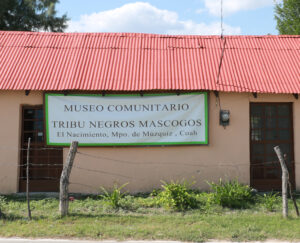 We received this email below from Maximillian Theron Frye, a descendant of the historical Seminole Chief Coacoochee “Chief Wildcat,” who was pictured (bottom left) in the Tribu Negros Mascogos Museuo Comunitario display in Nacimiento, near Muzquiz, Coahuila, MX.

I’m sure you’re both busy, so I’ll try to keep this short, but I finally got to see Searching for Sequoyah last night and thought the documentary was really interesting. I couldn’t help but share the picture I took while watching the film. The image they’re standing in front of is my 5th great-grandfather Coacoochee “Chief Wildcat” who led the Seminoles and many Kickapoos to Mexico from 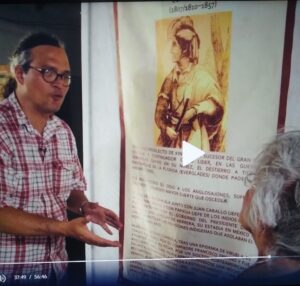 the Indian Territory. I’m his descendant through his grandson, Punjo Harjo Guy, who was born in the Seminole colony at El Nacimiento during the 1850s. Somehow Punjo ended up living with the Caddos after the Civil War and became fully integrated into the tribe as one of their main interpreters.

I’m also an avid genealogist, and I have taken an Ancestry.com DNA test for my research. I have quite a few DNA matches with connections to the Piedras Negras/Zaragoza area, as well as a DNA match who is a full-blooded Cherokee and potential descendant of Sequoyah through their paternal grandmother, Maggie Ballou. After looking into that matches’ family history and others’ research, I think their connection to Sequoyah is plausible and even somewhat documented. I have included the family tree information as attachments if you want to see it.

Another thing from the film that was interesting, is that the descendants of the Cherokee wolf clan in Coahuila had the last name Lopez. Lopez is a patronymic surname that comes from the medieval Spanish name “Lope” which means wolf.
Sincerely,